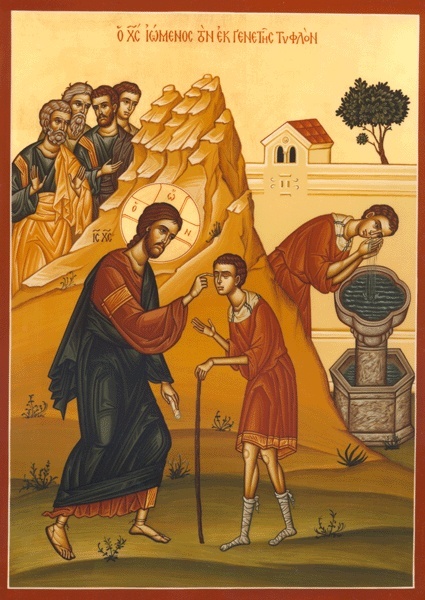 Now Jesus had made clay and opened his eyes on a sabbath. So then the Pharisees also asked him how he was able to see. He said to them, "He put clay on my eyes, and I washed, and now I can see." So some of the Pharisees said, "This man is not from God, because he does not keep the sabbath." (But) others said, "How can a sinful man do such signs?" And there was a division among them. So they said to the blind man again, "What do you have to say about him, since he opened your eyes?" He said, "He is a prophet." Now the Jews did not believe that he had been blind and gained his sight until they summoned the parents of the one who had gained his sight. They asked them, "Is this your son, who you say was born blind? How does he now see?" His parents answered and said, "We know that this is our son and that he was born blind. We do not know how he sees now, nor do we know who opened his eyes. Ask him, he is of age; he can speak for him self." His parents said this because they were afraid of the Jews, for the Jews had already agreed that if anyone acknowledged him as the Messiah, he would be expelled from the synagogue. For this reason his parents said, "He is of age; question him." So a second time they called the man who had been blind and said to him, "Give God the praise! We know that this man is a sinner." He replied, "If he is a sinner, I do not know. One thing I do know is that I was blind and now I see." So they said to him, "What did he do to you? How did he open your eyes?" He answered them, "I told you already and you did not listen. Why do you want to hear it again? Do you want to become his disciples, too?" They ridiculed him and said, "You are that man's disciple; we are disciples of Moses! We know that God spoke to Moses, but we do not know where this one is from." The man answered and said to them, "This is what is so amazing, that you do not know where he is from, yet he opened my eyes. We know that God does not listen to sinners, but if one is devout and does his will, he listens to him.